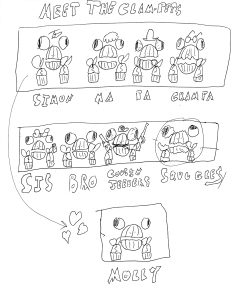 It just occurred to me that although you might have seen it mentioned over in my Twitter feed to the right (Over there…no, down just a bit. There, that’s the one), that I haven’t actually plugged my webcomic on this blog.

Soooo, you should check out my poorly-drawn webcomic. It’s at www.goblinbrook.com. Click on the “Goblinbrook Daily” tab. The comic stars a bunch of clams called Clam-pets. Sometimes it’s funny, but that’s not really the point.

The primary point of starting the comic was that my mum has been bugging me to do something with these guys since I started drawing them back in High School. That was over two weeks ago, at least (okay, okay, exchange “decades” for “weeks” and “three” for “two.”

Back in High School, I liked to doodle in the margins of my class notes. Robots, dinosaurs, alien tentacle things, and these clam-pet characters. I also took lots of notes, which presumably is why my science teacher would sometimes make snarky notes about my doodles like, “Lots of nice pictures here, aren’t there?” but never lower my Keeping Notes grade.

As for the Clam-pets, I can’t remember where the idea came from. But the shapes were easy enough to put together, because most of the clams’ body parts were just differently-sized versions of one another.

The Clam-pets came in handy in art class, too. One of our projects was to make a woodcut-like carving out of sponges. Again, the shapes were easy to deal with and I whipped out a Clam-pet in no time and was inking before most anyone else even had a notion of what they wanted to do.

Over the years, I’ve let my drawing skills wane. I actually used to be halfway good at capturing shading and nuance in buildings and faces. Now, I doubt I could draw a barbell with any semblance of verisimilitude. But the Clam-pets still come pretty easily.