What is Best in Life, Conan? 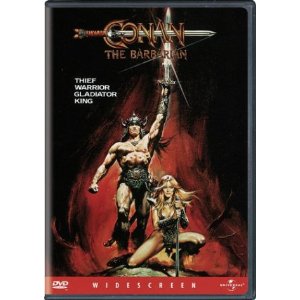 Conan, the version where he only lifts the sword up in the sky like that for the movie poster.

I haven’t checked to see how well the new “Conan the Barbarian” movie did or didn’t do in the theaters. However, it didn’t last nearly as long at the local multiplex as, say, “Rise of the Planet of the Apes” has, so I don’t expect it did all that well, which is a shame, because it’s an above-average fantasy film.

Of course, this just means that it’s better than “The Scorpion King,” “Dungeons and Dragons: The Movie,” “Legend,” and “Krull” and that it’s about on the same level as “The Sword and the Sorcerer” and “Reign of Fire” (although the latter may not classify since it’s more post-apocalyptic and should really fall into the tanks-and-dragons sub-genre of fantasy — that there actually could be a ‘tanks-and-dragons’ sub-genre of fantasy is kinda scary). Anyway, the new “Conan” doesn’t come close to the best sword-and-sorcery movies available, which would be “The Lord of the Rings.” Very little can.

How does its muscles stack up against the original “Conan” movie with Arnold Schwarzenegger, however?

Don’t get me wrong, the Arnohld “Conan” wasn’t exactly on par with a production of “Hamlet” (though it was better than Mel GIbson’s), but it had a style and a tone — a darkness, a comedy, a joy-of-swinging-a-swordness — that many fantasy movies have striven for and fallen short of in subsequent years.

Still, both movies suffered from Origin Syndrome. We see this with superheroes these days: the first of the series (almost always a trilogy anymore) must tell us where this guy or gal came from, what motivates them, what drives them to be more than the average Billy Zane on the street? Oh, and how did they get their superpowers? What is Conan but a superhero with a sword: unnaturally fast, able to withstand massive amounts of pain, incredibly strong?

It seems that we cinema-goers of the 21st Century can’t bear to have someone just there, being heroic. Where are our Dirty Harry’s? Our Shaft’s? Our Man With No Name’s? Even our Sherlock Holmes’s? Okay, so we have a new Sherlock Holmes that doesn’t feel the need to track about in Holmes’ childhood to show how he decided to become a genius investigator of near-unsolvable puzzles. Buuuut, where’s the rest of ’em?

The problem for writers and directors who want to work with the works and worlds of Robert E. Howard and Conan is that Howard never gave us an origin story for Conan. No, Conan comes out of the Cimmerian wastes and goes on about his business of Barbarian-ian-ing. Or whatever. He’s a thief, he’s a pirate, he’s a lover, he’s mostly a very efficient drinker and swordsman (or axeman, or spearman, or whatever-kind-of-weapon-happens-to-be-lying-around man).

This was because Howard was writing for the Pulps. In those heady days of the 30s and 40s and 50s (the 30s, for Howard), the pulp magazines (so called because of the cheap paper they were printed on) published adventure stories, mystery stories, action stories — stories that got right to it, and although some might be serialized, the writers didn’t spend a lot of time on background. Doc Savage was a wealthy guy who used his money and his Bowflex(tm) to fight crime along with his crew of fellow adventurers. Dashiell Hammett’s Sam Spade was a gumshoe ensconced in a ratty office in a ratty office building, but still managed to get in trouble because of the dames and managed to get out of it with his two-fisted way of diplomacy.

They were born whole cloth from the pens and typewriters of their creators, with very few exceptions. Even for those exceptions, such as Tarzan — raised, as most of us know, by apes and/or zebras in the wilds of Africa — we find out their background as a paragraph or two of exposition, rather than an entire story devoted to their origins. No, the action was AFTER the characters had already become the hero (or anti-hero) they would become.

So, those who chose to deal with Conan were faced with two options: 1). Stick to the episodic nature of the pulps and possibly lose the audience because there’s only the ‘monster-of-the-week’ (a term that I think started with “Buffy the Vampire Slayer”) and no binding, cohesifying narrative, or 2). Make something up.

In both versions of the cinematic “Conan”, the powers-that-be chose Option 2. Arnold’s Conan was sold into slavery by the guy who killed his parents and destroyed his village and thus he spends his life looking for Darth Vader (er, the Lion King? er, wait, no, Thulsa Doom) to wreak his vengeance. Mind you, once he gets it, then he can go on to the monster-of-the-week in “Conan the Destroyer,” just like Peter Parker can focus on Doctor Octopus in “Spiderman 2.” Even so, Conan is given a cohesive narrative that shapes his life. Never mind that in Howard’s version, it was never some outside force that shaped Conan; it was always Conan’s choice of what adventure he sought or stayed clear of (and he very rarely stayed clear of any).

In this new “Conan,” Jason Momoa’s Conan is given … exactly the same motivation: a warlord/sorcerer raids his village, kills his dad, and Conan spends the rest of his (movie) life seeking vengeance, with, I’ll give credit, some exposition about he had also been a thief, a pirate, and had raided the Elephant Tower, which are all references to Howard stories.

I suppose my argument here is not that the current movie didn’t use its opportunity to remain faithful to the books — to do away with the origin story and tell the stories, on film, that Howard had told, although that would have been sweet, but rather that they don’t strive for originality in themselves. At least the tropes of Shwarzenegger’s “Conan” created the benchmark for all the movies that would follow: no one saved the girl better than him; no one could lop the head off a serpent god as cleanly or with as much gusto.

The new “Conan” doesn’t do that. It uses the tropes of fantasy — family slain, vengeance sought, girl in danger (even girl is a spunky fighter, but still is in danger), an artifact must be reassembled to achieve ultimate power, there’s a prophecy in here somewhere, there’s a lot of bared breasts — but it doesn’t make them its own. Mind you, I’m all for exploring and even exploiting the tropes (especially that last one), but it has to be done with care, with appreciation for the form, and with elan. The new “Conan the Barbarian” feels like the filmmakers are just going through the motions, counting on the special effects and the sword fights to carry the movie. After all, it’s just fantasy, right? Not like it’ll be up for an Oscar.

But wait, the “Lord of the Rings” got some Oscars, if I remember correctly. And although maybe “Krull” was never meant to be that kind of fantasy movie (the guy’s primary weapon is, after all, essentially a throwing starfish), “Conan,” an iconic figure from our shared cultural mythos, should be.

Even so, I’ll probably get a copy of the new one when it comes out on DVD. After all, it is still above average for the genre.
–
The author knows he’s supposed to be writing reviews of the horror movies he’s been watching, and he swears he’ll do that (probably in a bi-weekly round-up), but he just saw “Conan the Barbarian” at the second-run theater and had to write this review. So there.

1 Response to What is Best in Life, Conan?