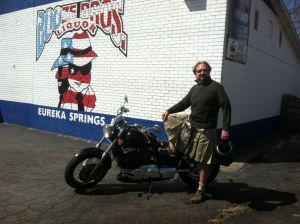 The author, his kilt, and a motorcycle.

The kilt as we know it, according to your friend and mine the Encyclopedia Britanica, was developed in Scotland in the 17th century. Before that, the Scots apparently had to wear sheep.

I like sheep well enough, but none of the sheep I know would be too keen on being tied around my waist. So I have a kilt, instead. Pretty soon, I’m going to have another one.

To answer the question I know you want to ask: no, I’m not Scottish. Or, well, I’m not overly Scottish. Like nearly anyone, I can do a halfway-decent impersonation of Scotty from Star Trek or Fat Bastard from the Austin Powers movies. But that’s about where the genealogical connections end.

However, these days, wearing a kilt isn’t limited to those people dangling from or recently fallen off of the Scottish family tree. There are lots of kilt-wearers about. Medieval recreationists and Renaissance Faire-goers wear them, and not just at their safely fenced-off medieval recreationing events or Renaissance Faires, either, but, y’know, in town where actual people can see them. Out in the desert, lots of hippie, creative types wear them at that annual engorgement of creativity and sunburned skin called the Burning Man Festival. In San Diego, I saw one on a guy waiting in line for the ATM. The other day, I even saw a sign advertising a kilt-wearing crew of window washers.

Me, I wear a kilt because I think they look cool–literally and metaphorically. “Literally,” because when worn correctly, kilts are, well, let’s say, “Airy.” “Metaphorically,” because a kilt is sort of the New Leather Jacket: as a guy, if you wear a kilt and a grin out in public, you’re saying that you’re quite confident about your masculinity. Also about your ability to weather blowhards who come along spouting “skirt” jokes.

Traditional Scottish kilts are made of wool, belted in the front or kept up by means of a piece of cloth called a “plaid” that goes up over the shoulder. Scottish kilts also require that you wear a sporran. A sporran is a pouch or bag, usually made of leather recently taken from a previously happy cow. You hang your sporran from the front of the kilt. You can put your money, keys, cell phone, lunch, sheep, and other essentials in the sporran. Actually, you have to, because traditional Scottish kilts don’t have pockets.

My kilt is not a traditional Scottish kilt. A company called Utilikilts makes the kind of kilt I wear. For one thing, most of them aren’t tartan. Also, a Utilikilts utilikilt has regular pockets. Sometimes it has cargo pockets. My dream utilikilt, the Survivor, has detachable cargo pockets. That’s right. Detachable. So when you’re at the airport and you have to go through security, you can just unsnap the cargo pockets and toss them on the conveyor belt without having to worry about emptying everything into your carry-on.

Mind you, you’ll still be body-cavity-searched by TSA security. After all, you’re wearing a kilt through the airport. But even that will be a…erm…breeze. Because, y’know, “Airy.”

I’ll admit that I haven’t yet achieved the manliness required to wear a kilt everyday. I use as an excuse the fact that I only have the one and that for purposes of practicing good hygiene, it’s probably best for everyone if I only wear the kilt to Scottish Highland Games, Renaissance Faires and maybe, on special occasions, to restaurants that have “Ye Olde” in their names. I also use an excuse that I don’t have the Survivor yet, and so I’d need to empty my pockets at the airport. As if going to the airport is an everyday occurrence or something.

Truth is, it’s a lack of Fonzi-level manliness.

But I’m getting there. Just a few weekends ago, I went on a motorcycle ride with the local motorcycle group…er, gang. Now, sure, these aren’t hardened Hell’s Angels types, but they don’t ride mopeds, either. Well, at least not on the rides we go on.

I decided to wear my kilt.

In the cool of morning, the motorcycles roaring down the highway at sixty-five miles an hour, my kilt riding up a bit higher than I would have preferred and me losing the feeling in my legs from the chill, I determined that wearing a kilt might not have been as good idea as it seemed when I woke up that day.

But the other riders were impressed.

Whether or no the restaurant has “Ye Olde” in its name.

C. Patrick  would like to thank his mother who, even though his kilt has pockets, made him a sporran out of an opossum she’d shot in the front yard. That, in itself, is a whole other story. If you’d like kilt-wearing tips, the author would be happy to discuss that with you in the comments section below.

2 Responses to Kiltjoy Was Here